Is Negative Self Talk Sabotaging Your Happiness? 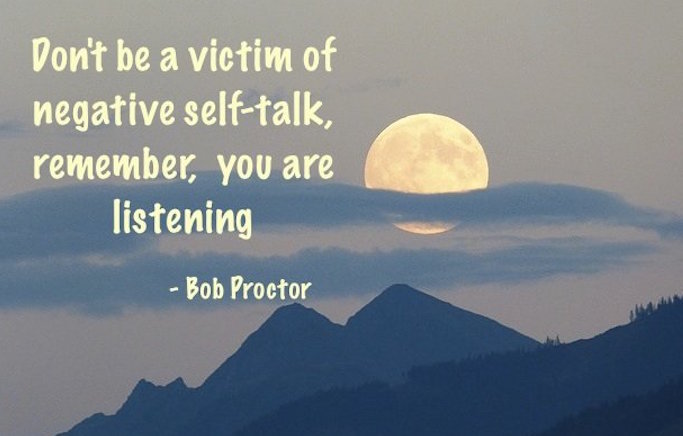 Is negative self talk secretly sabotaging your happiness, dulling your sparkle and stopping you being you?

Have you ever stopped and noticed how you speak to yourself?  Are you always telling yourself how stupid you are?  Do you blame yourself mercilessly for not being a better parent/boss/gardener, not being more organised or for eating too much ice-cream?

As we go through life, we interpret everything that happens as either positive or negative, and whether we’re aware of it or not, we then start up a running commentary to ourselves about it.

In other words, we are all constantly talking to ourselves.

Often it’s silent, in your head, but sometimes it spills out and you find yourself chattering away to yourself.  Everyone does it (even if they say they don’t!) and apparently it’s healthy to have a good old chat with yourself, as long as it’s not an excuse to beat yourself over the head about your perceived shortcomings. 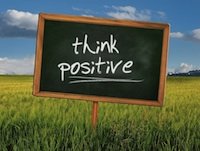 The Truth About Positivity

Because that's when it becomes negative self talk – and that’s when you want to sit up and take notice and do something to change it.

Negative self talk ranges from the usual ‘how can I be so stupid/clumsy?’ to ‘I’m such a loser, I’ll never be able to do this’… and sometimes even worse than that.

When it comes to doing something new we have all sorts of negative self talk going on…  you know, that voice in your head telling you that you'll never be able to do it or you shouldn’t have been so gung-ho about signing up for those writing classes - you know you'll never actually stick to it...

The trouble with this is two fold – obviously when you engage in negative self talk it’s not going to make you feel particularly good, but worse than that – you’re attacking yourself and probably saying things that you would never say to another person.  And that can be really self defeating.

Secondly, this kind of self talk usually runs on autopilot, so the more you allow yourself to think and speak to yourself like this, the more likely it is to be happening subconsciously when you don’t even realize it.

Because whatever is happening inside gets replicated outside.  So if you find that there seem to be a lot of people around you who don't recognise your abilities, the areas where you shine - it's probably a lot to do with how you are behaving towards yourself.

So… how can you stop negative self talk…?

ONE  Become aware of it, because right now you may not even be conscious that you’re doing it, or you may be grossly underestimating how much you do it.

The easiest way to do this is the next time you are feeling worried, angry or irritated about something, take good note of your thoughts, and any self-directed comments you make.  You can go as far as to make a note of them somehow, because when you see what you say to yourself - you may be shocked.

Stop yourself when you hear yourself say things like ‘how stupid can you be?’ or ‘I’m such a klutz!’,  then imagine saying that to your best friend.  You probably wouldn’t, huh?  So why do you speak like that to yourself?  It’s incredibly debilitating even if you aren’t aware of it, and it needs to stop.  Because the more you undermine yourself and pull yourself down, the less joy you'll find in life.

TWO  Challenge your negative self talk – next time you realize you’re doing it ask yourself these questions:

Would I say that to my best friend/husband/daughter (anyone close to you)?

Turn the previous question around - is there anyone I do you talk to like that?  If so, it's probably someone who you don't like much or who has behaved in a totally unacceptable manner. Think about how you feel afterwards, usually a little ashamed that you lashed out.  Now realise that you are directing the same energy to yourself.

Is what I’ve just said (or thought) actually true?

If someone I care about said that to me how would I feel?

If someone I care about did what I just did (that caused the negative self-talk to start), what would I say to them?

Is talking to myself this way helping the situation, and is it making me happier?

THREE  Understand that you're doing the best you can at all times generally, and that there's no need to attack yourself for some perceived wrong you've committed.

Stop and give yourself a break by realising 'I was overwhelmed with all the things on my plate last week, and I just need to organise my time better…' and then apologise to yourself - just as you would if you had just lashed out at your best friend.

If you catch yourself telling yourself what an idiot you are because you spoke your mind and upset someone. Stop yourself mid-sentence and re-frame it by remembering you have every right to speak out about your opinions, 'yeah, I probably shouldn’t have said it the way I did, but next time I’ll be more careful, and at least I'm starting to speak out and be honest about how I feel about things!'

FOUR  Simply stop being so hard on yourself and be kind instead.  We are often our own harshest critics, so when you catch yourself, say sorry.  Actually, I find it works best if I think about someone else saying that to me - how hurtful it would be... and then I say sorry and buy myself an ice-cream - any excuse for ice-cream!

So as you journey along the path you've chosen, if catch yourself in the act of negative self talk, the time has come to treat yourself with respect and you will be amazed at how much better you feel.

And when you feel better, life is better and your free spirited nature can shine even brighter. 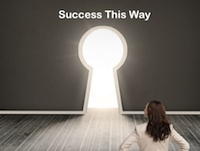 Are You Afraid Of Success?

How To Make More Money